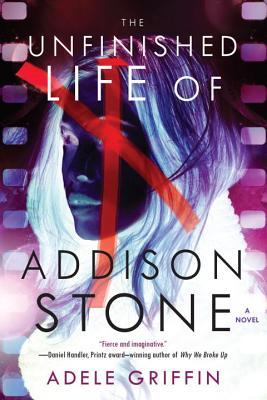 The Unfinished Life of Addison Stone

National Book Award-finalist Adele Griffin tells the fully illustrated story of a brilliant young artist, her mysterious death, and the fandom that won't let her go.From the moment she stepped foot in NYC, Addison Stone’s subversive street art made her someone to watch, and her violent drowning left her fans and critics craving to know more. I conducted interviews with those who knew her best—including close friends, family, teachers, mentors, art dealers, boyfriends, and critics—and retraced the tumultuous path of Addison's life. I hope I can shed new light on what really happened the night of July 28.

I’ve been racking my brain on how to make this review fun and original and sadly, I don’t have an artsy bone in my body!  Thus, I’m afraid that you’re stuck with this:

What a unique book!

The Unfinished Life of Addison Stone is made to feel like an investigative piece and it consists of a series of interviews, emails, author notes, and magazine articles.  To top it all, the book is peppered with pictures of Addison and her art.  Oh, and if you want to see some of them, plus the trailer and a video from the model that portrait Addison, head over to this website.  Really, go check it out and I’ll wait right here.

Back already?  Good. Addison Stone was an artist. She had an exceptional talent for painting, especially creating insightful portraits.  From the beginning of the story – and as you can deduce from the title – we know that Addison has passed away in a tragic accident.  The story itself takes us from her childhood, all the way to her last hours and beyond to see what’s happened after her death.   Addison was beautiful, charismatic, full of life, loyal to few, and hated by some.

I think that she moved on by herself way to early and without an iota or supervision or a steady support system or stability.  I think that Lincoln was the best think that happen to Addison, BUT the benefit was not reciprocal.  I believe that she was fiercely loved, and admired, but somehow that wasn’t enough.

On a serious note, Addison had a serious mental disease.  It is alluded that she was schizophrenic, but it seems to me that she also had bipolar disease, and struggled with bouts of depression.  She had a great support system in her friends (not so much her family), and two therapists as well.  The problem is that she felt her meds kept her from being free and being herself.  I think her crisis could be seen coming from a mile away.

For the most part, the setting is New York City, and we can see how in love Addison was with everything she got to experience there.  She felt stifled in her small town life and she wanted something brighter, bigger, and full of energy and without rules or boundaries.  The writing, as explained before, is different.  Still, this format makes the reader feel like they’re reading a true story.  I liked the writing and how insightful it was.

Overall, The Unfinished Life of Addison Stone is a unique reading and visual experience.

Find the rest of the tour here. 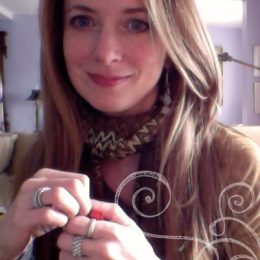 Adele Griffin is a two-time National Book Award Finalist and highly acclaimed author of numerous books for Young Adult and middle grade readers. Her works include Sons of Liberty and Where I Want to Be, as well as the popular Witch Twins and Vampire Island series. Her most recent thriller Loud Awake and Lost will be out this fall from Knopf.
Adele lives with her husband, Erich, their two young children, and their dog, Edith, in Brooklyn, New York.

« Review: Four Seconds To Lose by K.A. Tucker
Top Ten Books People Have Been Telling You That You MUST Read »