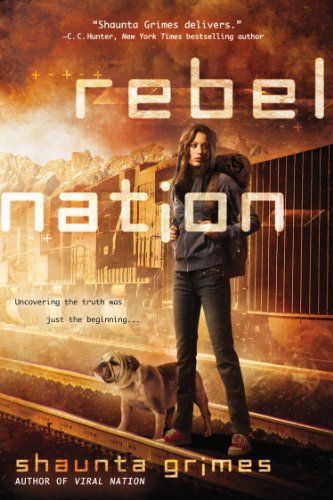 Sixteen years ago, a plague wiped out nearly all of humanity. The Company’s vaccine stopped the virus’s spread, but society was irrevocably changed. Those remaining live behind impenetrable city walls, taking daily doses of virus suppressant and relying on The Company for continued protection. They don’t realize that everything they’ve been told is a lie…

Clover Donovan didn’t set out to start a revolution—quiet, autistic, and brilliant, she’s always followed the rules. But that was before they forced her into service for the Time Mariners. Before they condemned her brother to death, compelling him to flee the city to survive. Before she discovered terrifying secrets about The Company.

Clover and the Freaks, her ragtag resistance group, are doing their best to spread the rebellion and stay under The Company’s radar. But when their hideout is discovered, they are forced, once again, to run. Only this time, The Company has special plans for Clover, plans that could risk her life and stop the uprising in its tracks…

Last year I participated in the blog tour for Virus Nation (see review here), I really loved it because it’s very different.  I was dying to read Revel Nation and it didn’t disappoint at all.

One of the things that makes this book different is the plot development.  It is so unpredictable and I find it fascinating.  Every time that I think I know what’s going to happen, the complete opposite ends up happening!  The story picks up a couple of months after the ending of Virus Nation and follows our favorite characters in their fight against The Company.

The second thing that makes this series so good are the characters.  Clover is autistic and she’s amazing.  She’s smart, loyal, logical, and tries her best to overcome her limitations to help others the best way she cans. Jude is so understanding, and tender with Clover and their relationship is so sweet.  I love them both and I hope it all works out.  West is so endearing, he’s only 20 but has the weight of a big group of people to take care of.  He’s full of doubts, but does what needs to get done without question and tries to be the leader that the Freaks need.  These are the main players in the resistance.  Go Freaks!

“He looked at the pallet he’d made on the floor out of the sofa cushions and started to ease away from Clover.

He slipped down so he was lying next to her and she curled against him, her head on his chest. How was he ever going to keep her safe?”

The main freaks that we met in the previous book, Christopher, Phire, Marta and Emmy are all there.  Also Isaiah, James, and Leanne, join them, even if they are not exactly willing at the beginning.  It is also interesting that we now get to see how other live outside of the walled cities and the possibilities.  As bad guys go, Bennet is one of the absolute worse.  I’m not even sure that we know the extent of his madness and his obsession, but I have a feeling that we will know soon enough.

The story is told in the third person from multiple points of view, mainly from Clover, Jude, West, James, and Bennett.  I know it is a bit unusual for YA books to do this, but it works perfectly, in the story. Revel Nation expands on the world building that stared in the first book.  This is a dystopian that starts in an undetermined future when a virus and wars decimated most of the population in the US.  The cure was achieved because someone found a portal to travel to the future and brought the ‘cure’ over to the present.  The world changed a lot during that time.  Not regressed, but most survivors live within walled cities and don’t have access to things that we take for granted, like electricity, phones and internet. Except, of course, if you work for The Company.  So… no zombies or mutations, but instead a lot of discontent and political turmoil. The writing is so good!  I loved how easy it is to understand and follow.

“Virginia City was like something out of one of the old Western movies they sometimes played at the library. “City” was a little ambitious, Clover though, but guessed that when it was built, the name fit.”

Holy cliffhangers Batman!  What was that?  The wait for the conclusion of the series will be torturous at best.

Have you read Viral Nation?  What do you think of the cover?  Do you like dystopian? 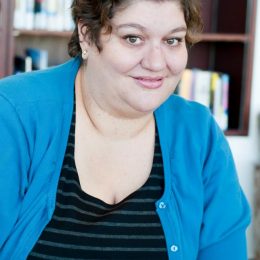 Shaunta Grimes has worked as a substitute teacher, a newspaper reporter, a drug court counselor, and a vintage clothing seller. No matter which direction she strays, however, she always comes back to storytelling. She lives in Reno with her family, where she writes, teaches, and perpetually studies at the University of Nevada. Viral Nation is her debut traditionally-published novel.