Oh, my gorgeous readers!  You cannot imagine how trilled I am to participate in the tour for Marissa Meyer’s Renegades!  What an awesome trip this was and I will tel you all about it!  Please stick around for the review, my bookmarks and the giveaway. 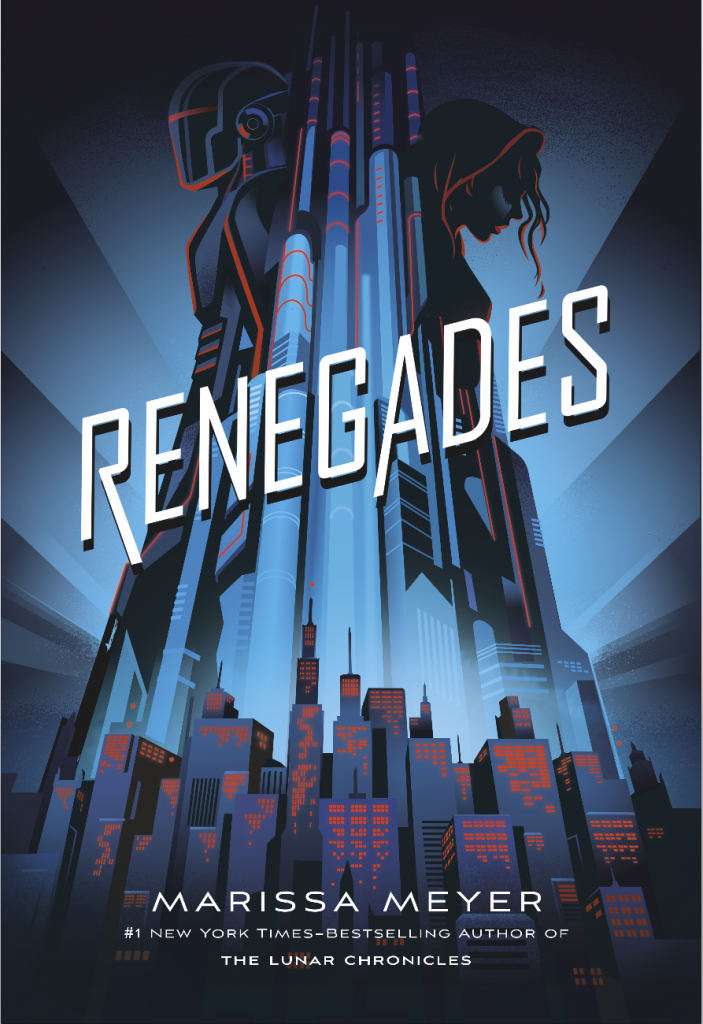 Well, please don’t shoot to kill, but this is my very first book by Meyer.  There, I said it.  Now, I’ve owned Cinder since forever, but never actually read any of her books before.  I feel awful too because I’ve meet her before and she’s the sweetest person ever.  Well, let me just say that Renegades lived up to the hype and then some.

“Do you have what it takes?”

I’ve always loved superheroes.  I was the kind of geeky teenager that read comics and watched superheroes movies and series.  I adore all of Marvel and DC movies about it now as an adult, so it’s not surprising that I jumped head first into the adventure that it’s Renegades.

The story takes place in Gatlon City, where Ace Anarchy revels on the treatment received by the prodigies – people with abilities.  On the wake of this revolution, the 10 years of the Age of Anarchy the world was in chaos.  The government, laws, and the economy crumbled, leaving desperation, crime and suffering in its wake.  The Renegades raised to the task as the superheros people needed.  Trying to fix a broken world and give it hope and order.  This is the world in which the Anarchists now live in fear.

Nova is Ace’s nice and she has reason to hate the Renegades.  She was raised by Anarchists and now goes by the name of Nightmare.  She has train all her life to be an Anarchist and fight the status quo.  She’s agile, smart, an inventor, she has perfect aim and she doesn’t need to sleep.  In order to bring the organization from within she takes extremes measures.

Adrian is the adopted son of Captain Chromium and Dread Warden, after her own superhero mom died.  He’s a handsome, strong and tall African American with a superpower of sketching things into being.  He’s good to the bone, he wants to do good, be the superhero that the world needs, be a good leader and be better.  He also takes matters into his own hand to make himself a better hero.

There are so many characters in this book!  The Council of five that now governs the city that are celebrities now, the

The world building is SO good.  Every detail has been thought out and planned to the tee. The plot is well developed, with enough action, twists and turns too keep the reader always interested and turning page after page.  The pace is a bit slow at times, but makes it up in the action scenes in spades.

I can see that both the Anarchists and the Renegades make good points, but I’m not sure I agree with the way they want things done. I don’t think that the Renegades can keep going as they are either.

“One cannot be brave who has no fear”

After all that gushing you might ask, why the 4.5 stars review.  I shall tell you guy my dear readers.  It was the ending that did it.  It was a bit of a cliffhanger and a big shock for sure.  That being said, I cannot wait for the next book, even if the excruciating of a one year wait starts now. 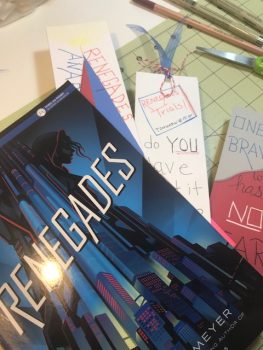 I made three bookmarks with quotes from the book.  I think my favorite is the one on the right, although they look much better in person than in my picture 🙂 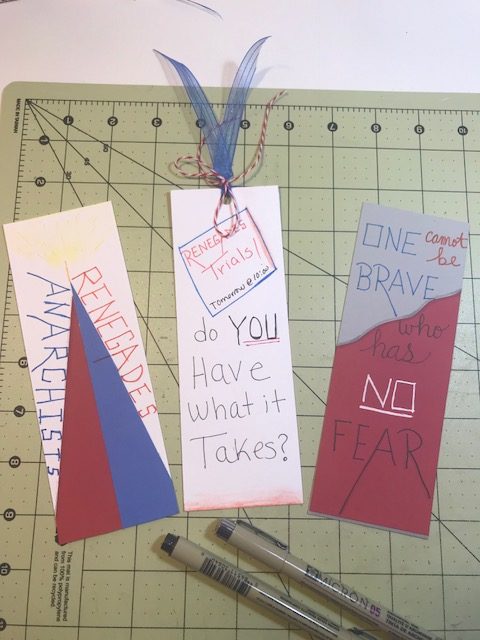 Please note that this is my own giveaway, not sponsored by the publisher.  Okay?  That being said, I have two of them:

Giveaway One is for my own (used) Renegades ARC and it’s for US ONLY and the bookmarks pictured above.

Are you a Renegade or an Anarchist? 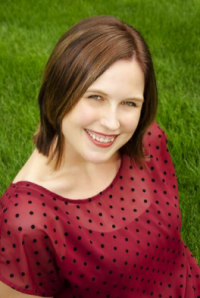 « {Waiting for Wednesday} From Twinkle, with Love & Defy the Worlds
{Leah’s Scary Review} The Dreadful Tale of Prosper Redding by Alexandra Bracken »