Ask Aria Morse anything, and she must answer with the truth. Yet she rarely understands the cryptic words she‘s compelled to utter. Blessed—or cursed—with the power of an Oracle who cannot decipher her own predictions, she does her best to avoid anyone and everyone.

But Aria can no longer hide when Jade, one of the few girls at school who ever showed her any kindness, disappears. Any time Aria overhears a question about Jade, she inadvertently reveals something new, a clue or hint as to why Jade vanished. But like stray pieces from different puzzles, her words never present a clear picture.

Then there’s Alex, damaged and dangerous, but the first person other than Jade to stand up for her. And Will, who offers a bond that seems impossible for a girl who’s always been alone. Both were involved with Jade. Aria may be the only one who can find out what happened, but the closer she gets to solving the crime, the more she becomes a target. Not everyone wants the truth to come out.

Do you remember that in every movie or book based on mythology there is always an Oracle?  You might also remember that most of what they say makes absolutely no sense (until is too late, that is)?  Well, this book is about the life of a modern day Sybil and what that entails.

I found that the premise of Ask Me is very original and I have to confess that I was expecting more.  There is no good explanation on why Sybils exist, or rather, what is their purpose other than sounding like they were crazy.  The blessing (or curse) has not use or reason.  The girls in Aria’s family get the gift around the age of 12 and goes away at the age of 17, there is really not much that a girl can do or understand about being able to always tell the truth, and honestly is sucks. I wish the background information would have been clearer than grandma’s book (which was not helpful.)

I did like Aria as a character.  She was very lonely and that might explain some of her assumptions towards people, but if I had her talent, I would have someone I trust ask me the right questions to get to the bottom of the problem.  Just my two cents here.  All in all, she was a strong person and always tried to do what she thought was right.

On to the guys.  It is harder to talk about Will and Alex without giving anything away, but I’ll try.  Will is the rich-and-popular-football star, you know the type right?  Alex, was climbing the popularity ladder thanks to the girl he was dating, but he is the bad-boy-brooding type. All of the sudden, these two boys notice Aria and start talking to her, I’m not sure why, but there you go.

I really love Aria’s grandparents.  They tried to raise her with loving care, after her parents washed her hands off her (NOT the best parents award here.)  Her grandmother had been a Sybil too and tried to help Aria as much as possible, while giving her space.  Grandpa and his shotgun were hilarious 🙂

What is up with the people in this school?  They were so mean.  Aria had a really hard time at school because she was known as a mumbler (she can’t stop, but tell the truth; and can you imagine how many questions are asked in a school!), but these kids were relentless, they seem to think it was okay to push, trip, jibe, mock, and so on, just because she was different.

The story is told from the first POV, thus we get to know Aria really well.  There are two short passages from the killer’s point of view as well.   Also, each chapter starts with a few lines of a song (Aria listen to music in her MP3 player to avoid listening to questions) and the songs were always mentioned within the chapter.  I did like the writing, it was fluid and easy to read.  The plot was easy to predict, but well executed.  I did know who the murderer was from halfway through the book, but that didn’t bother me much.  The ending came very rapidly and I wish we could have explored what happened next more. An epilogue would have been nice.

Overall, Ask Me is an entertaining read of the very frustrating life of a modern day Oracle and about a string of murders and how they both intersect.

About the cover:  I really like the cover.  It portraits Aria hiding behind her hair. You might notice that the girl doesn’t seem happy and that the picture lacks color.  I also like the fonts and their coloring. 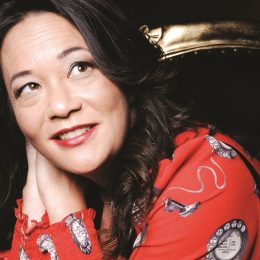 Kimberly Pauley is the award-winning author of Sucks to Be Me, which was honored on the YALSA Quick Picks for Reluctant Readers list, and a paranormal mystery starring an oracle, called Ask Me. Born in California, she has lived everywhere from Florida to Chicago and has now gone international to live in London with her husband and son. She is also the founder of YA Books Central, one of the first and largest teen book websites in the world. Visit her online at www.kimberlypauley.com

One response to “Blog Tour & Review: Ask Me by Kimberly Pauley”