Also by this author: The Goddess Test, Pawn, Pawn, Captive

For the past two months, Kitty Doe's life has been a lie. Forced to impersonate the Prime Minister's niece, her frustration grows as her trust in her fake fiancé cracks, her real boyfriend is forbidden and the Blackcoats keep her in the dark more than ever.

But in the midst of discovering that her role in the Hart family may not be as coincidental as she thought, she's accused of treason and is forced to face her greatest fear: Elsewhere. A prison where no one can escape.

As one shocking revelation leads to the next, Kitty learns the hard way that she can trust no one, not even the people she thought were on her side. With her back against the wall, Kitty wants to believe she'll do whatever it takes to support the rebellion she believes in—but is she prepared to pay the ultimate price?

Here are a few of my favorite quotes from Pawn

“If you protect your pawns and they reach the other side of the board, do you know what happens then? Your pawn becomes a queen. Because they kept moving forward and triumphed against impossible odds, they became the most powerful piece in the game. Never forget that, all right? Never forget the potential one solitary pawn has to change the entire game.”

“Even if we’d never met, even if you never existed, I would still love you beyond all reason for the rest of my life.”

“Seconds ticked by, and my heart pounded as I waited for her to say something. Maybe I was nothing more than a pawn to her, a nameless piece in whatever twisted game she was playing, but she had to acknowledge me eventually.”

“I’m never better off without you,” he said. “We’re in this together. I love you, and that’s never going to change, all right? I’m yours no matter what your rank is. You could be a I, and I would go Elsewhere just to find you.”

You can read my review of Pawn here.

Here are my favorite quotes from Captive!

The more time I spent as Lila, the less certain I became that I knew myself anymore at all.

“You’re not my prop,” said Knox, his tone softening. “I’m trying to protect us both. What we’re doing, dangerous as it is—it’s the right thing to do. You know it is. Don’t mess it up just because you’re having a bad night.”

“Everything I do is for the greater good, Kitty. I hope you understand that, because I need you to trust me.”

“No matter who you pretend to be, you’re Kitty Doe. You put your life on the line again and again to protect the people you love, and you would never let millions die just so you could live.”

“I would rather die with you than live a single day without you.”

“Promise that no matter what happens to me, you won’t do anything stupid,” I said. “You won’t die to protect me, or die to avenge me, or—anything. If I’m going to be safe, then you have to be, too. Because I want that picnic in this life. I want that cottage. I want our future, and I’m not going to let anyone, not even you, take that from me again. Got it?”

There’s no such thing as a bloodless revolution.

My review of Captive will be up on my blog on the release day! Be sure to look forward to it! 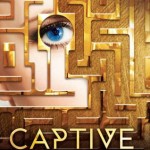