Hi gorgeous people!  Welcome to this stop of An Incurable Insanity Blog Tour presented by Reading Addiction.  You can find the rest of the tour here. 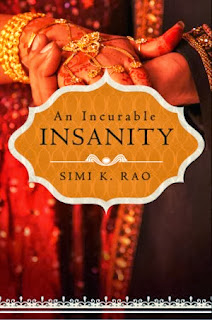 Shaan Ahuja found himself bowing to tradition and agreeing to an arranged marriage to the beautiful Ruhi Sharma. He went through the motions but had no intention of carrying through on his vows. His last foray into matters of the heart with an American girl had left him scarred and unwilling to try again. Thoroughly disillusioned and disgruntled he wasted no time in making his intentions clear to Ruhi on their wedding night. But, he was completely unprepared for what his new wife had in mind.

I have a confession to make: I usually don’t read books that deal with a culture that I don’t know anything about.  I don’t know why, I’m perfectly fine reading fantasy (invented worlds) or books of ancient Rome, for instance, but never a contemporary.  I’m happy to report that An Incurable Insanity has changed my mind.
I think my main difficulty was that I didn’t like Ruhi as a character.  I sympathized with her at the beginning and felt sorry for her, but after the first month of marriage, her personality changed completely.  She went from passible and submissive bride to a hellion.  I admire her spunk and her insistence on being independent and to express her opinion, but it seems like she was actually insane a few times there.  If I were Shaan, I would think about it twice (or more!); I guess she did bring some excitement to his life.
At the end of the story I think I liked Shaan better.  Don’t get me wrong, he treated Ruhi atrociously as the beginning, but he never did cheated on her (his past actions are another matter altogether), and he turned out to be a devoted husband and quite romantic.  I think that since Shaan was older than Ruhi and thus more experienced, he knew how to handle her impulsiveness and rash decisions much better.  That’s not to say that he was perfect, but I guess I understood him better.
Other characters, to be quite honest, didn’t add a lot to the story.  Some were trying to keep the couple together and others were oblivious as to what was going on.
The story is told in the third person, mostly from Ruhi and Shaan’s point of view, but also from others, as a way for the reader to know a little more about the couple. The plot is well explained in the synopsis and simple, if not for Ruhi’s constant outbursts and changes of heart.  The writing flows nicely and it’s easy to read.  This is a very clean romance, except for the innuendo and the language.
Overall, I enjoyed An Incurable Insanity and I think I’m over my fear of books that deal with other cultures.

Ruhi Sharma was a blushing bride, practically a newlywed, locked up in this glittering cage for almost a month, twenty-nine days to be exact; an object of envy of all her friends and family.
Twenty-nine days ago, she had signed her name beside his on the marriage certificate. She had gone through all the miscellaneous ceremonies associated with the typical grand Indian wedding—the engagement, the Mehendi, the Sangeet, the Haldi, and the grand finale (her father had spared no expense) until finally her betrothed had staked his claim by placing the Sindoor on her forehead and tying the Mangalsutra around her neck, and she had quietly and blissfully followed him around the sacred fire carefully listening to and reciting the Saath Pheras in her mind.
She was the very beautiful and accomplished daughter of Amrit and Devyani Sharma, the apple of their eye, and they had left no stone unturned in raising her the best way they possibly could.
Friends and family were surprised for not only had Ruhi been provided with a very good education, she held an MBA from a leading institution, but her parents had also made sure that she was adept in all other various skills, which a well-bred traditional Indian girl is desired to be proficient in. Therefore, nobody marveled when marriage proposals came pouring in from all directions.
But the Sharmas were choosy; they wanted only the best for their golden child, and they did get it, or so they surmised.
The idea of giving their daughter’s hand in marriage to the well-accomplished son of the most well-known family in Chandigarh was beyond their wildest imagination. It was wilder because they hadn’t gone in search of it, rather it had come and landed on their lap.
Shaan, the youngest and most eligible of the Ahuja clan, was twenty-seven, a fresh aerospace masters grad from a premier engineering institute located in the Los Angeles county of United States, California, who had already bagged a plum job in a leading aeronautics and space exploration company in sunny LA.
“My son makes interplanetary spacecraft. He’s the man of the future” had become the proud and frequent rant of Mr. Shiv Ahuja, who for some odd reason seemed to be trying to paint his son in the most rosy of tones even though he really didn’t need to, for as soon as Ruhi saw her future husband’s likeness, she lost her heart, and there was no question of a retrieval.
—o—
“Chai?”
“Huh? Yes please with just a pinch of sugar. Thanks!” He took the cup from her hands, careful not to touch her fingers.
Ruhi closed her eyes; she could now repeat every movement, every word by rote. He was a creature of habit…and she was bored. What was supposed to be the most exciting time in every young woman’s life had turned out to be the worst…Well, not really. He wasn’t mean, rather he was the perfect gentleman, too perfect!
Oh how she wished he would rather be screaming mean and nasty. At least that would bring some excitement into her not so-happening life! She laughed, pausing as she brushed her long black hair, rather hysterically.
The bombshell had dropped on their wedding night. He had walked into the room late as she sat there, a shy bride in all her wedding finery waiting, nervous yet excited at the same time, to meet the man she had hardly spoken to or looked at. What would he say, talk about, or do?
She had heard a lot of stories about what to expect, some factual and some fabricated (her friends had prepared her well), but she wanted her own to be special, unique, and it was…
Sitting down on the bed in front of her, he had taken her hand in his and said very gently, as if to tone down the trauma, “I bet you are one of the most beautiful brides in the world, but I’m sorry I cannot make love to you. There is someone else.”
Not sure if she’d heard right, Ruhi had watched puzzled as he lay down on the mattress and turned his back to her. Is that it? A plain and blunt dismissal of her dreams, her life? Was that all?
About the Author 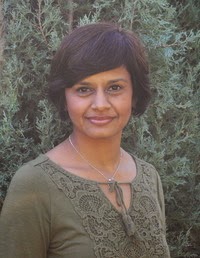 Simi K. Rao was born in India and has been living in the United States for several years. This book is her first foray into writing. The inspiration for the story came from what she has seen transpire among and within the immigrant community.  Some of the experiences included are her own; some have been garnered from friends and casual conversations with acquaintances. She also writes poetry, is an avid photographer, loves to travel, and is a practicing physician. She currently lives in Denver with her family.

*Disclosure of Material Connection: I am a member of Reading Addiction Blog Tours and a copy of this book was provided to me by the author. Although payment may have been received by Reading Addiction Blog Tours, no payment was received by me in exchange for this review. There was no obligation to write a positive review. All opinions expressed are entirely my own and may not necessarily agree with those of the author, publisher, publicist, or readers of this review. This disclosure is in accordance with the Federal Trade Commision’s 16 CFR, Part 255, Guides Concerning Use of Endorcements and Testimonials in Advertising*