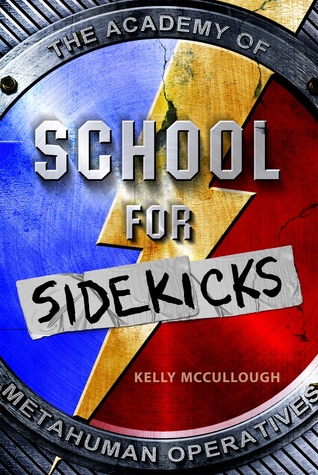 Being a hero isn't always what it's cracked up to be in this funny and genuine novel from adult fantasy author Kelly McCullough.

Evan Quick is a GIANT superhero geek who dreams of one day becoming a superhero himself. Every morning he checks to see if he's developed his powers overnight, and every day there's nothing. No flying, no super strength, no invulnerability—that always hurts to check—no telepathy, no magic. Not even the ability to turn off the alarm clock without smacking the switch.

But then Evan somehow manages to survive a supervillian's death ray, and is sent to the Academy for Metahuman Operatives. Unfortunately, his new school is not what he expected, and instead of fighting bad guys, Evan finds himself blacklisted, and on the wrong side of the school's director. If Evan ever wants to realize his dream, he must convince his "mentor" Foxman, a semi-retired has-been, to become a real hero once again.

I went into this book hoping for a fun, exciting book and that’s exactly what I got. School for Sidekicks was all kinds of cheesy but it was so. much. fun.

School for Sidekicks is about Evan Quick, who’s always dreamed of becoming a Mask. Someone with powers that fights the bad guys, the Hoods. And one day during a field trip with his class, he survives a supervillain’s death ray and is brought to the AMO, the Academy of Metahuman Operatives, also called the School for Sidekicks. But it’s not all that Evan thought it would be. He finds himself blacklisted by his hero because of what happened during his field trip and if he ever wants to be a real Mask, he’ll have to convince his mentor Foxman, a semi-retired has-been, to ecome a real hero again.

When you read the blurb, you know that this’ll be all kinds of cheesy. And it is, absolutely. But it’s the right kind of cheesy and corny. There’s a great story underneath it with lots of action, great characters and a lot of humor too. That’s what made it so much fun to read! If you just embrace the cheese and the sometimes silly codenames, you’ll have so much fun reading this book! I know I did. The only negative thing in this book, sort of, is the ending? It felt a tiny bit rushed and it’s an open ending so there’s room for a sequel, which I would totally love because I want more with these characters. Their story isn’t finished yet.

Speaking of the characters, I loved all of them. Evan’s friends at the AMO are so much fun! I loved Jeda aka Speedslick and Howl, who doesn’t want to be called by her real name because she hates it, and Burnish, who doesn’t start out as his friend. I also loved Mike aka Minute Man, Evan’s teacher. I liked Evan’s parents, who go through a lot in this book too. It’s a lot to adapt too and I’m happy they didn’t just stick with either being completely fine with it or the oppposite. They went through different stages. But my favorite characters are of course Evan himself and his mentor Foxman, who provides most of the book’s humor. Evan is such a fun character to follow and I loved how he reacted to his dream coming true and then finding out it’s not all he hoped it would be. He grows a lot in this book and, like I said, I want more! But Foxman was the best. He’s hilarious and I loved him and he’s on my list of favorite characters now.

School for Sidekicks is a book full of action, humor and cheesy fun. I’d recommend it to fans of movies like The Avengers and especially Sky High. Or TV-shows like The Flash. Or even fans of the old traditional, kind of cheesy, Marvel and DC comics. Read it! It’s a lot of fun.

6 responses to “Bieke Reviews {School for Sidekicks by Kelly McCullough”