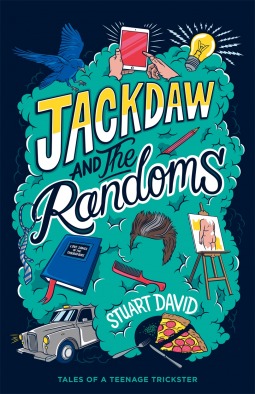 Jackdaw and the Randoms

Most people call me The Jackdaw. If they don't, I tell them they probably should.

Meet fifteen-year-old Jack 'Jackdaw' Dawson, a young man with a serious plan. Daydreaming in class one day, Jack is hit over the head with an idea so blinding, so extraordinarily visionary and so downright fantastic he knows it can't fail. It's his ticket out of school - an app that will stop you from getting into trouble for daydreaming in class (ahem...) Fame, glory and tons of money seem just around the corner - but then Jack runs into a few problems.

First of all, his warring parents are determined to push him into a career of their choosing (mum says office, dad says factory) without much thought as to what Jack might actually want. Secondly (and quite importantly) Jack doesn't know the first thing about making apps, and the only person who does wants nothing at all to do with Jack.

That is, unless he does her a favour... which leads to someone else needing another favour, then another and another - until Jack finds himself sat upon a very precarious pile of promises to a whole bunch of random people. Can the Jackdaw complete his scheme, or is this too much for even his superior brain to cope with?

Oh my god this was such a nice surprise! I honestly didn’t know what to expect when I started this book. I requested it because it sounded good and I liked the cover. I really never expected to enjoy this as much as I did. This book was so much fun!

Jackdaw and the Randoms is about Jack Dawson, also called Jackdaw, because he looks like a jackdaw with his grey eyes and black hair. One day Jack has an idea in class. A great, brilliant idea that’s so great it can’t possibly fail. But in order to get that idea off the ground he’ll need some help. And the only person who can help him, hates him. So he does her a favor. But that leads to another favor and another and another. And then there’s his parents that keep fighting about his future. His mom says office, his dad says factory. Neither asks Jack what he wants. How is the Jackdaw going to get out of the mess he created?

Honestly guys, this book deserves more time in the spotlight! It was so much fun! I can’t remember the last time I just sat down to read a book that ended up being this much fun. It’s not very long, my eARC counts 223 pages, so it’s a fairly quick read and it’s very engaging! I read it in one sitting, just because I was having a blast reading it. That’s partly because of the writing and partly the characters. The writing was very lighthearted and funny. There are times it could go the standard contemporary road and be overly dramatic, but it doesn’t. It stays fun to read even when things are looking bad for Jack.

Then there are the characters. There are quite a few of them and I liked all of them. Yatesy, Sandy, Elsie, Uncle Ray,… Jack’s parent’s were okay, I didn’t like them as much since I don’t really like how they never asked Jack what he wanted for his future. But my favorite character, of course, is Jack! He’s such a great main character and I loved his narration. He’s secretly a really good guy, honestly. Jack is clever, funny, zesty and full of spunk. And he’s quite the schemer. I think he can talk himself out of anything. When this book came to an end I was sad because I wanted more of him, but then I finished it and in the end there was a page announcing another book about Jackdaw and I literally did a happy dance. YAY!

Jackdaw and the Randoms is a 2015 contemporary novel that should be on your radar. I really recommend this book to all of you because it’s such a fun read and Jackdaw became one of my favorite characters of all time! It may not be a literary masterpiece, but it’s definitely a must-read.

« This Book Changed My Life #1
Review: The Heart of Betrayal by Mary E. Pearson »