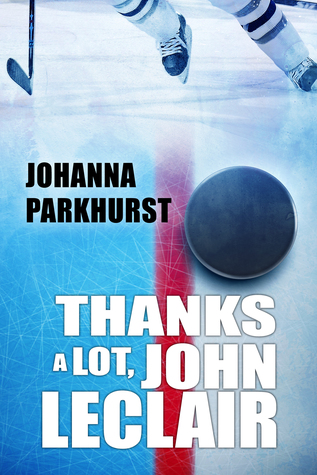 Thanks a Lot, John LeClair

A Companion to Here's to You, Zeb Pike

Sixteen-year-old Emmitt LaPoint has secretly been writing letters to his hockey idol, John LeClair, for years. So it’s probably only fitting that Emmitt’s small Vermont town seems desperate to make him the next LeClair. After all, Emmitt is about to lead his high school hockey team to the state championship, he has a near-perfect GPA, and he’s liked by almost everyone.

But even golden boys have problems, and Emmitt has more than his share. His father’s back in town to breathe down his neck. He’s happily dating his coach’s nephew, Dusty, but almost nobody knows he’s gay—and that secret is getting harder and harder to keep.

When Emmitt discovers Dusty is keeping secrets of his own, he’s forced to decide exactly what kind of golden boy he wants to be.

Well I’m just a big puddle of disappointment right now. For two reasons. One, I hate it when I get this supernice review request for a book that’s actually right up my alley and then I end up not liking the book. It’s the worst. And two, I think this book could have been so great but it just… failed to impress me. Which is never fun, obviously. And I’m going to explain why that is in list form because sometimes all you can do is just make a list.

♦ First off, this does not feel like a companion novel to me. This is a sequel. And I didn’t know that going in. I’ve read some reviews after I started this and it said it could be read as a standalone but it just didn’t feel that way to me. I feel like I missed the first part of the story. Which I did because the first book tells us how Emmitt and Dusty meet and fall in love. And here I just feel like I was dropped into the middle of a story and I was just a bit lost. And it also stopped me from connecting to the romance fully. Which makes me all of the sad.

♦ And it doesn’t really help that the writing is nothing all that special to me. Though I did like most of the dialogue, which can be very hard to get right in a YA novel.

♦ I feel like there were no stakes at all for Emmitt, which makes all of the drama rather pointless. I never once felt like Emmitt was being challenged. Because everything always worked out perfectly for him. Sometimes even so perfectly that it became a tad unrealistic. That would be after he finally decides to come out. The stuff that happens because of it was just… Yeah I just didn’t buy it. Not at all.

♦ Also, Emmitt was too perfect. Did he have flaws? Yeah sure but because everything always works out perfectly for him anyway those flaws kind of get cancelled out. And I didn’t feel like he changed all that much by the end, character-wise. Sure he came out to everyone and is now honest about who he is… but he’s still the same person. He didn’t really grow all that much in my eyes. Which = sadness. But I did like his relationship with his brother Casey.

♦ I also liked that it puts a spotlight on the You Can Play project, which is so massively important that it deserves all the attention it can get.

Overall, it kind of pains me to say that I didn’t really like this book all that much. Should you try it? Sure! I’ll never tell anyone not to read a book because I don’t like it. For all I know you could love it to pieces. But I’d also like to recommend Jerkbait by Mia Siegert along with this one because that one also features hockey and LGBT awesomeness and I loved that one so. Try both if you’re into those things.

« {Waiting on Wednesday} The Missing Thing You Said
Meet Our New Co-blogger! Introducing Steph aka Effie! »

2 responses to “Bee Reviews THANKS A LOT, JOHN LECLAIR by Johanna Parkhurst”