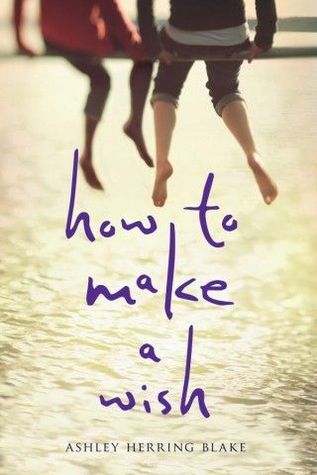 How To Make A Wish

Grace, tough and wise, has nearly given up on wishes, thanks to a childhood spent with her unpredictable, larger-than-life mother. But this summer, Grace meets Eva, a girl who believes in dreams, despite her own difficult circumstances.

One fateful evening, Eva climbs through a window in Grace’s room, setting off a chain of stolen nights on the beach. When Eva tells Grace that she likes girls, Grace’s world opens up and she begins to believe in happiness again.

How to Make a Wish is an emotionally charged portrait of a mother and daughter’s relationship and a heartfelt story about two girls who find each other at the exact right time.

This is one of those books that’s hard for me to review. Because while I LOVED some parts of it and want to flail about those, there are also parts I really didn’t like that kept me from loving the book as a whole. But those things are personal issues I have with the book and therefor might not bother other readers. But if I list those dislikes, I might keep people from picking this book up, which I don’t want because I still think lots of people should read it. Am I making any sense whatsoever? Probably not. Oh well.

How To Make a Wish is about Grace and her mother Maggie. They have a complicated and dysfunctional relationship in which Grace has had to be the grown-up more times than she can count. And this really is the heart of the story. This mother-daughter relationship that’s kind of messed up and needs a lot of work and is actually not very healthy. And while I loved parts of this side of the story, I had some problems with it too. Which relates mostly to the characters, but I’ll get back to that. I did love how it developed, even if it got a bit too dramatic sometimes etc. I loved that romance wasn’t a cure for anything in this book and that it ultimately came down to the mother and the daughter having to fix stuff together. But I also love that it didn’t all wrap up in a neat little bow with rainbows and sunshine.

I also want to give a shout-out to the awesome friendship between Grace and her best friend Luca. I LOVE that they’re not more than friends and it never even gets hinted at that it could be more. It’s just a fantastic, platonic friendship between a boy and a girl and YES. THANK YOU. It’s possible, people. Romance need not be involved every time.

Speaking of Luca, I loved him and his family. He was a great friend and I loved his mom and brother and honestly wouldn’t mind having a book about them alone. Though I did kind of want more of Luca’s girlfriend Kimber and his brother Macon. But we can’t have everything, I suppose. I also ended up liking Jay and Pete, which I did not really expect. But I did. So yay.

My main problem with this book lies with Grace, Maggie and Eva. Maggie, and I say this in the nicest way possible, was a horrible mom. And I find it sad that their dysfunctional relationship went on so long without anyone doing something about it because it’s just not healthy for either of them. When Eva comes into Grace’s life, she changes a lot of things up and while I didn’t necessarily have a problem with her, I didn’t feel like I got to know her as well as I would’ve liked. And then we have Grace… who I just didn’t connect with. She frustrated me SO much and yes she grew in the story and was developed well enough, but I just wanted to hit her with a frying pan. I’m sorry. I just did. I didn’t like how she brushed off her mother’s behavior for SO long and how she acted towards Luca sometimes when he confronted her about it. I’m also mildly disappointed that her music didn’t play a very big role ultimately. Which is sad because it’s so important to her but in the story itself it’s just… not.

The romance was both great and frustrating. The latter because sometimes it took over a bit and I didn’t like that because I wanted to focus on the other stuff. And sometimes it felt like it was going to make the story in one of those “love cures all” situations. Which no. Just no. But it was also great because the author didn’t shy away from anything. This book is very sex-positive with an f/f romance, which I enthusiastically applaud and flail over because THANKS. YA needs this.

In the end, How To Make A Wish has a lot going for it, but it frustrated me personally a lot. I still highly recommend it because this is just my opinion and therefor not necessarily yours. If you’re a contemporary fan, you should definitely check this one out.