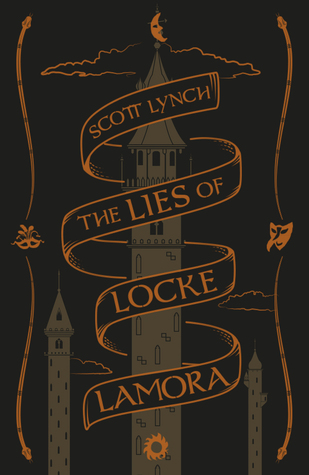 The Lies of Locke Lamora

They say that the Thorn of Camorr can beat anyone in a fight. They say he steals from the rich and gives to the poor. They say he's part man, part myth, and mostly street-corner rumor. And they are wrong on every count.

Only averagely tall, slender, and god-awful with a sword, Locke Lamora is the fabled Thorn, and the greatest weapons at his disposal are his wit and cunning. He steals from the rich - they're the only ones worth stealing from - but the poor can go steal for themselves. What Locke cons, wheedles and tricks into his possession is strictly for him and his band of fellow con-artists and thieves: the Gentleman Bastards.

Together their domain is the city of Camorr. Built of Elderglass by a race no-one remembers, it's a city of shifting revels, filthy canals, baroque palaces and crowded cemeteries. Home to Dons, merchants, soldiers, beggars, cripples, and feral children. And to Capa Barsavi, the criminal mastermind who runs the city.

But there are whispers of a challenge to the Capa's power. A challenge from a man no one has ever seen, a man no blade can touch. The Grey King is coming.

A man would be well advised not to be caught between Capa Barsavi and The Grey King. Even such a master of the sword as the Thorn of Camorr. As for Locke Lamora...

I kind of hate myself right now. Because this book has been on my TBR for AGES and I never picked it up for some reason. I always just glanced at it while looking for my next read but then moved on and chose another book. Not sure why, really. It just never jumped out at me despite the raving reviews. But then Cait read it and flailed over it. And I got a beautiful hardcover copy for Christmas from my co-blogger Liza. So I finally read it. And now I hate myself because I should have read this ages ago when I first got an ebook copy of it.

So where do I even start with this one? The writing? Yes, let’s start with that. It’s fantastic. Admittedly, the back-and-forth in time with the interludes took me a bit to get used to but then I did and I loved them. So in the end they didn’t take away from my enjoyment of the book at all. Though I do advise everyone that is bothered by it at first… Just give it time. You’ll get used to it. And if not, do not give up on this book because it’s SO GOOD. Everything from the world-building and the 3rd person POV to the incredibly awesome dialogue. It was all so very very very good.

I do not read adult Fantasy very often. I am a contemporary girl. But this book knocked my warm fluffy socks off and blew my mind. It’s so clever plot-wise and there are tonnes of little and big cliffhangers and they kept me glued to the pages the whole time. It gets bloody and stabby while also always being sassy and funny, making me laugh out loud one page only to make me break into heaving sobs a few pages later. Oh, yes, occasionally it punches you in the feels ridiculously hard and you’ll cry and sob and wail because your heart was ripped out and stomped on and torn to pieces but you’ll keep reading anyway because IT’S JUST THAT BRILLIANT.

But of course, as always, my favorite part… the characters. OH MY GOD THESE CHARACTERS. They’re all A+++ for real. From the smalles minor character to the main character Locke. They’re all superb and I love them. But my dear Gentleman Bastards are my favourite of course. The Sanza twins Calo and Caldo, who are clever and hilarious all the time. They talk in unison and finish each other’s sentences and they’re the best. There’s also the group’s apprentice, Bug, who is adorable and small and so gutsy that it borders on stupid, which only makes him even more adorable. And then Jean, who’s badass and always goes to save Locke even if he’s seriously badly wounded himself. His friendship with Locke is a new BROTP and I love them and their friendship is goals. Their whole squad is goals.

SPEAKING OFF LOCKE. Locke Lamora is such a sassy, clever, precious idiot. I adore this guy. Seriously. He’s so smart and witty and cunning but also an idiot that always gets in over his head and thus ends up needing to be saved by Jean. He is precious and I love him and he’s the best. I love me a sassy thief.

And AHAHA my feels are absolutely destroyed right now. I went through all of them and I do not regret it one bit. I’m actually tempted to sob just because I don’t have the sequel yet, which makes me all of the sad.

SO. Long story short, you should read this if you haven’t already. And you need to do it now because The Lies of Locke Lamora the best thing of ever. There. Now go forth and read it or flail over it with me if you have already.

“Bug,” Calo said, “Lock is our brother and our love for him has no bounds. But the four most fatal words in the Therin language are “Lock would appreciate it.”

“Well, I for one have no expressions of sympathy to spare since he kicked my balls hard enough to make them permanent residents of my lungs.”

‘You’ve got that motherly concern in your eyes, Jean. I must look like hammered shit.”
“Actually, you look like you were executed last week.”

“I can’t wait to have words with the Grey King when this shit is all finished,” Locke whispered. “There’s a few things I want to ask him. Philosophical questions. Like, “How does it feel to be dangled out a window by a rope tied around your balls, motherfucker?””

“Jean,” said Locke, “you are a greater friend than I ever could have imagined before I met you; I owe you my life too many times over to count. I would rather be dead myself than lose you.”

« {Rachel’s Reading Updates} The One With Fiery Stars, Timekeepers & Asthmatic Half Dragons
Quite The Novel Idea is 1 Year Old! So Here’s a Giveaway! »