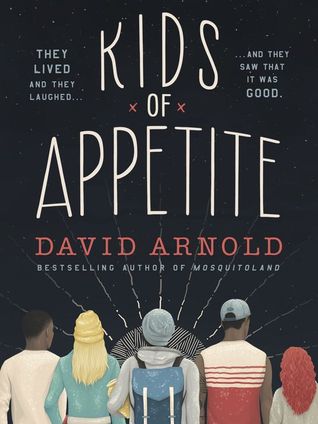 Also by this author: Mosquitoland

The bestselling author of Mosquitoland brings us another batch of unforgettable characters in this tragicomedy about first love and devastating loss.

Victor Benucci and Madeline Falco have a story to tell.
It begins with the death of Vic’s father.
It ends with the murder of Mad’s uncle.
The Hackensack Police Department would very much like to hear it.
But in order to tell their story, Vic and Mad must focus on all the chapters in between.

This is a story about:

1. A coded mission to scatter ashes across New Jersey.
2. The momentous nature of the Palisades in winter.
3. One dormant submarine.
4. Two songs about flowers.
5. Being cool in the traditional sense.
6. Sunsets & ice cream & orchards & graveyards.
7. Simultaneous extreme opposites.
8. A narrow escape from a war-torn country.
9. A story collector.
10. How to listen to someone who does not talk.
11. Falling in love with a painting.
12. Falling in love with a song.
13. Falling in love.

WELL THAT WAS JUST ALL KINDS OF AMAZING. I am a very happy human right now people. Very happy indeed. Because I just read this fabulous book that I loved to bits and honestly that’s just one of the best feelings in the world, is it not? Of course it is. I read Mosquitoland either last year or the year before, I’m not sure, but I do know that I loved it and wanted more from that author. And now I got more and GUESS WHAT? I loved this book too! Huzzah! *flings confetti in your faces* But now I have to put all this love into a somewhat coherent review and ahahahaha I’m gonna fail so hard at this. But I’ll try my best. I am a professional, after all. *cough*

KIDS OF APPETITE tells the story of Vic and Mad. But mostly Vic. They’re currently in the police station with a story to tell. One that starts with the death of Vic’s death. And ends with the murder of Mad’s uncle. And of course the police would love to hear that amazing tale. But to tell the story right Mad and Vic must tell all the chapters inbetween those two points. And what a story it is.

I don’t even know where to start with my gushing about this book. So my attempts to make this review a bit coherent and all professional-like are failing already. Perhaps I should start by applauding how immensely diverse this book is. YES, that’s a great plan. *pats self on the back* So yes, this book is amazingly diverse and I love it. Because diversity is awesome. Of course there are POC, but our main character Vic has Moebius Syndrome, which, I’ll admit, I was not familiar with going into this book. I also didn’t know it would be featured. But it was and I love that because I found out about it and was educated about it and that’s the power of books for you. Always teaching me stuff. WHO NEEDS SCHOOL ANYMORE HONESTLY? Nobody, that’s who. Just read all the books and you know everything you need to know. Ahem. (Stay in school kids.) So yes, I was educated about Moebius Syndrome in a very awesome and non-preachy or info-dumpy way. Huzzah! Yay, diversity!

And from that I’ll move on to tell you that the writing was frakking fantastic. It’s so engaging and it hooked me right from the start. It was told in a non-linear style where we switch out between the interrogations at the police station to the story their telling. And I loved that because it kept me on my toes. It made me curious and want to read more and find out what happened. It never bored me once and there was humor in it and you guys know I love funny books. But great writing won’t do you much good if the story is stupid. Luckily the story itself was amazing too. It was unique and interesting and diverse and hit me in the feels so many times. And I loved how it kind of built up the whole time and then the twist at the end had me like “WHAT THE WHAT???” And when I finished I was smiling so hard my jaws still hurts. So yeah. Great writing. Great story. Let’s move on to the most important part, the characters.

I’ll start off by saying that I loved all the characters. And before I go a bit more in depth about the most important ones, I want to quickly mention that I loved the detectives interrogating Mad and Vic and also Vic’s family, however brief they were in the story. I loved how well I got to know Vic’s dad and his beautiful relationship with Vic’s mom even though he’s not actually IN the story. Beautifully done, sir. I applaud you. Also, I very much love Vic’s dad. He was one hell of a guy. But now on to the main five, our “kids of appetite”.

♦ Vic is the most important character of the story. By all means the protagonist. He’s still mourning his dad and he does not like his mom’s new boyfriend. So when the guy asks his mom to marry him, he takes off with his dad’s urn and runs into Mad. He’s so sad and he has Moebius Syndrome so people tend to think he’s stupid but he’s not. He’s actually really smart and he loves opera and paintings. I loved his voice and I just wanted to hug him, really.
♦ Mad is a really cool and colorful person. And by that I mean she dresses very colorful. She always carries around the same book, like it’s an extra limb and it’s her favorite book and occasionally she gushes about it. But she’s also a bit sad because she lost her parents and her uncle is a douche. She very loyal though and she has this thing with Venn diagrams and she tends to put situations she’s in in one of those. She’s awesome and I want to hug her too.
♦ Coco is the awesomest. She’s eleven and from Queens and she raps and she loves ice cream and she curses up a storm and she’s adorable. But she’s also an orphan and a bit tragic so I basically want to hug her too.
♦ Baz & Zuz are two brothers and they’re kind of a bit mysterious. Especially Zuz who doesn’t talk and just snaps his fingers instead but he’s still adorable and he’s loyal. They’re both so kind and protective. Baz sleeps with a baseball bat like it’s a security blanket and he has nightmares. So basically I want to wrap them both in warm blankets because omg their past is so sad. All the love for these two.

I feel like this review is very long… OH WELL. I think I’m done now? Maybe? OH but I do want to mention that while I liked the romance, I wasn’t the hugest fan of it and it maybe went a teensy tiny bit too fast for me? But I still liked it? So yeah. NOW I’m done.

Overall, it is very obvious that I have much love for this book and obviously you should get a copy and read it so we can gush together. Especially about Vic, who is my precious little munchkin. But basically all of the KOA are on my favorite characters list and they alone are reason enough for you to read it. So go forth and do the thing while I cuddle them all. GO!

9 responses to “Bee Reviews KIDS OF APPETITE by David Arnold”