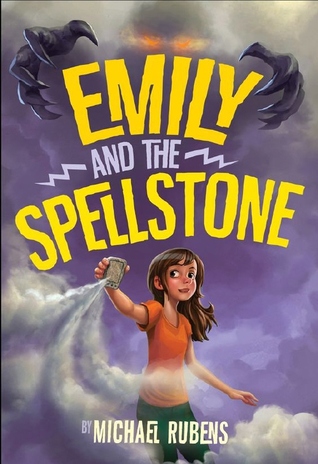 Emily and the Spellstone

Emily picks up a stone that looks like a cell phone but has unexpected magical powers. It's a Spellstone! Now that she has become an unwilling Stonemaster—one who wields the power of the Stone—she has to figure out Spellstone technology fast if she is to survive a hair-raising adventure among giant dogs, demons, clones, mean girls, and deeply wicked people who want the Stone. A witty tale of a quiet girl who discovers she's a hero when she needs to be. Stonemasters rule!

If I had to choose one word to describe this book, it would be amusing. Either that or charming. It’s everything a middle grade fantasy book should be at its core. Fun, charming, exciting, amusing,… And while I enjoyed it very much, I found that it lacked that little extra that would have made it amazing.

Emily and the Spellstone is about the twelve-year-old Emily, a girl that hates adventures. One day when she visits the beach with her family, she finds a cellphone. Only, it’s not a cellphone. It’s a magical stone. And by picking it up, she has become a stonemaster. Soon Emily is swept up in one of the adventures she never wanted to have, fighting off evil monsters, wicked people that want the stone and befriending a demon. And all that while fending off mean girls at school and avoiding her parents finding out about any of it.

I really enjoy Michael Rubens’ writing a lot. He has such a nice writing style with so much humor that’s easy to get into. I loved his YA book The Bad Decisions Playlist so I was eager to check out this one and for the most part, it did not disappoint. I loved the overall story and the dynamics between Emily and the demon Gorgo, who was just so very amusing. I loved their banter and their growing friendship. And I loved the friendship that blossomed between Emily and Angela. I also liked the message the book sent.

The story, while exciting and kind of original in some parts, did wrap up a bit easily for me, but it’s Middle Grade so I guess I can forgive it for that? The villains seemed a bit… easily defeated. And while the ending was left open just enough for a possible sequel, I don’t like that even if it’s a standalone, it just ended up basically in the same spot where we started. With just a few details changed. It went back to the status quo instead of raising the stakes a bit. I know, I know, middle grade. But I think we should encourage middle grade fantasy where the stakes are a bit higher.

Also her parents were just… kind of… there. If they’d been left out completely, nothing would have changed. That is something that irritates me more in MG than in YA. And it irritates me A LOT in YA. But in MG the protagonists are even younger so WHUT ARE YOU DOING PARENTS? Seriously. I never could have gotten away with any of this at twelve years old. Never.

All in all, Emily and the Spellstone was a very amusing and charming story that I really enjoyed despite my issues with it overall. if you’re a fan of Middle Grade Fantasy, I highly encourage picking it up.