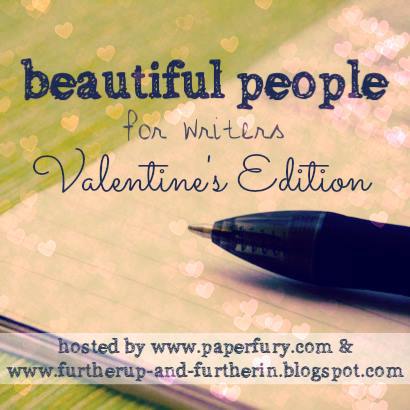 Beautiful People is a linkup hosted by Sky @ Further Up and Further In and Paper Fury! It’s aimed at writers so they can answer the questions about their characters and their books.

This March edition will be the last one in which I talk about Three Seconds to Sunrise because it’s finished and I’m moving on to a new project. HUZZAH! Happy day!

What first inspired this character? Is there a person/actor you based them off?

Eli was first inspired by one of my High School friends, also called Eli. He’s always been like a brother to me and though we lost touch a bit in the last few years, I still see him as my friend. And so I asked him if I could use his name for my main character and he said yes, so yay!

Eli’s looks are based on him too and singer Matt McAndrew, who you can see in this video. He has the tattoos & guitar & curly hair and everything. Only thing that he misses is Eli’s fedora. This video of him singing took my breath away and I knew: That’s Eli! Listen, and enjoy!

Eli used to help out at his dad’s bakery, so he’d get up early and work the morning shift until noon and then he’d hang out with his friends and play music and all that good stuff. After he quit, he spent most of his days playing music, writing songs and hanging out with Will, duhh, until he starts college in the Fall.

If they joined your local high school, what clique would they fit into?

Eli is very hard to fit into one category, but they always put him with the nerds. Even though he’s really cool.

Write a list of things they merely tolerate. Ex: certain people, foods, circumstances in their lives…

How do they react in awkward silences?

He probably starts singing or whistling. That, or he sneaks out of the room. Mostly the latter. He feels very uncomfortable in awkward silences so he’ll probably make up a horrible excuse and leave.

Can they swim? If so, how did they learn?

Yes, he can. He learned in Kindergarten.

What is one major event that helped shape who they are?

His grandmother’s death. He finally started being himself and not let other people influence his life. GO ELI!

What things do they value most in life?

Will. His music. Cake, probably. His friends. Will.

Do they believe in giving other people second chances?

Yes, he does! But not more than that. People get 2 chances with him, and that’s it.

Do they have any trust issues?

Sometimes, yes. He trusts his friends without question, but new people… It might take a while.

Your character is having a rough day…what things do they do to make them happy again? Is there anyone they talk/interact with to get in a better mood?

OH OH! When Eli has a rough day, he goes to his studio, where Will finds him and cheers him up. Because he has telepathic powers that only work on Eli. Sort of. He just knows Eli very well.

And there we go! Eli is my munchkin and I’ll miss having his voice in my head constantly. Of course I’ll see him again when I start edits on Three Seconds and he appears in the companion novel about his brother Shatter This Starless Night, but still. I love him dearly and I hope you guys ever get the chance to fall in love with him & Will too.

It’s time for my 1st ever #PitchWars! Meet… Me!

{Mirror Mirror} Writing, Books & Not Much Else

« {Liza Reviews} Simon vs. the Homo Sapiens Agenda by Becky Albertalli
{Mirror Mirror} Liza’s Sick, Busy, and has a LOT to Read »