Also by this author: Clockwork Prince, The Iron Trial, Doll Bones, The Darkest Side of the Forest

From NEW YORK TIMES bestselling authors Holly Black and Cassandra Clare comes a riveting new series that defies what you think you know about the world of magic.

From two bestselling superstars, a dazzling and magical middle-grade collaboration centering on the students of the Magisterium, an academy for those with a propensity toward magic. In this first book, a new student comes to the Magisterium against his will -- is it because he is destined to be a powerful magician, or is the truth more twisted than that? It's a journey that will thrill you, surprise you, and make you wonder about the clear-cut distinction usually made between good and evil.

I’ll start off by saying that yes, there are a few similarities between this book and Harry Potter, but it’s not as bad as I thought it would be and it’s still surprisingly original. However, while I did like it quite a bit, I wasn’t blown away at all.

The Iron Trial is the first book in the Magisterium series by Cassandra Clare and Holly Black. It’s about Callum, whose father has always warned him that the mages from the Magisterium were bad and that he should do everything he can to fail the Iron Trial he has to do to see if he can go to the Magisterium. And while he does fail, he gets chosen anyway by Master Rufus. But it soon becomes clear that there is more to the Magisterium and his past than he ever imagined. Is he a powerful mage, destined for greatness or is the truth more twisted than that?

Yeah it certainly has some similarities to Harry Potter, but at the same time it’s not similar enough to call it a rip-off. Not at all. Callum Hunt is nothing like Harry. While Harry was shy and kind of introvert in the beginning, Callum is stubborn, says what’s on his mind but still a bit antisocial because he never had any real friends. His leg is screwed up because of stuff that happened when he was a baby and everyone at home calls him a freak. The only real similarities is that there is in fact a magic school and a powerful bad guy lurking in the shadows. Of course there are the two other students, boy and girl whom Call befriends and one of the other students who hates him. But that is were the similarities end.

The magic in this book is not like in HP. Here it’s really elemental, which I really really loved. The mages draw on the elements but can also be consumed by them if they’re not careful and I liked that aspect of it. The ones that are complete consumed by their element are called elementals and they’re kind of evil. The bad guy here is called the Enemy of Death and he’s a master of Chaos. There’s only one person who can defeat him and that is another master of Chaos they call the Makar. And that person is not the one you’d expect it to be. There is a big twist in the end that I did see coming for a bit.

Holly Black and Cassandra Clare are great together. While I love Holly Black, I’m not very fond of Cassandra Clare because City of Bones was kind of meh to me. But writing this together was a good move and I really liked the writing in this book. However, the story did get a bit boring around the middle, it was a bit slow. I am curious about how this series will continue so I’m definitely going to read the sequel!

The Iron Trial is a good first book in the series and as it goes along, these two authors will get better and better writing together. I see a lot of potential here, so I do encourage you to check this one out. If you love Harry Potter and Percy Jackson and other series like that, you should at least enjoy this one. 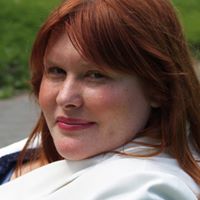 Cassandra Clare was born overseas and spent her early years traveling around the world with her family and several trunks of fantasy books. Cassandra worked for several years as an entertainment journalist for the Hollywood Reporter before turning her attention to fiction. She is the author of City of Bones, the first book in the Mortal Instruments trilogy and a New York Times bestseller. Cassandra lives with her fiance and their two cats in Massachusetts

{Review} A Heart So Fierce and Broken by Brigid Kemmerer
Waiting on Wednesday #56: The Iron Trial by Cassandra Clare & Holly Black

« Waiting on Wednesday: Ticker by Lisa Matchev
Review: The Queen of Kentucky by Alecia Whitaker »